HomeJoin the Movement
A- A A+ 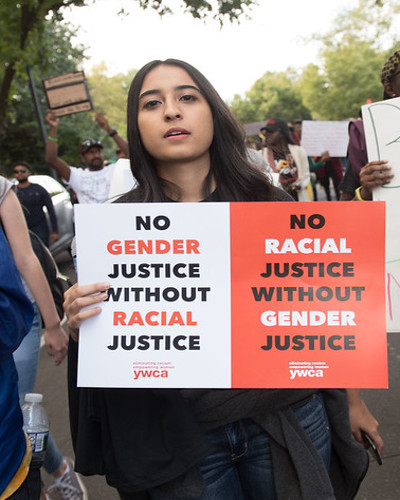 YWCA-MC is sustained by values and committed to diversity, equity, and justice and we strive to prevent and address all forms of violence and racism. YWCA’s across the country are joined in the movement.  In 2009 The YWCA USA adopted racial justice in our mission. We are dedicated to justice for those most impacted by inequality and oppression. Our mission has grown and evolved throughout the years.  We believe there is no racial justice without gender justice and conversely no gender justice without racial justice.   Empowering women requires eliminating racism and discrimination comes in many forms.

We implemented concrete ways to address eliminating racism by first recognizing disparities for people of color in the areas of housing, education, jobs, healthcare, criminal justice, and asset growth.  We take a public stance against race-based hate crimes and violations of Civil Liberties.  Through ongoing programs, conferences, events, and initiatives, YWCA leaders are engaging communities to recognize the broad-based consequences of racism.  We provide culturally-competent gender and racial justice training in Spanish and English.

This movement requires courage and work. We serve communities most affected by economic, racial, and gender oppression.  We feel that together we can influence policies and legislation that ensure progress for all people impacted by violence, poverty, racism, and sexism.

YWCA-MC is not politically affiliated. As a non-profit, we are committed to our advocacy initiatives but remain neutral politically.

Are you ready to join the movement?  Support YWCA-MC by donating financially, donate your old baby clothes or office clothing to our safe house or donate time by volunteering.  You can also become involved with us on Social Media: Facebook, Twitter, Instagram.   Spreading our message online would be a major contribution.  Stay connected for this years Stand Against Racism activities.